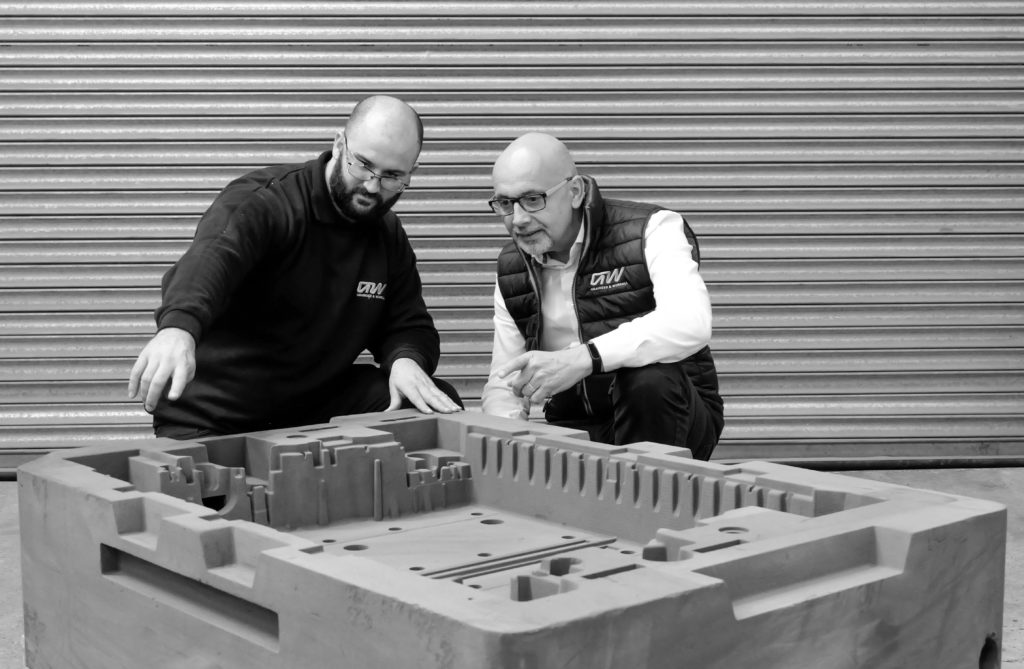 The move to EV and hybrid powertrains has not been as disruptive as many first predicted. Indeed, the fundamentals of design and the requirements for the casting of cylinder heads, blocks and transmission components have not changed. However, substantial challenges have arisen in the engineering of new ICE powertrains.

Legislative change is a great driver for the industry. Modern engines have to be more thermally efficient than ever before, driving new technologies for sophisticated castings and design. Downsizing has multiple benefits but presents a real challenge for traditional casting methods. Practical issues mean wall thicknesses cannot be reduced indefinitely. The fluidity of liquid metal is a function of its cooling rate, so if walls are very thin, the metal will not reach complex spaces before it solidifies. Accelerating the filling process may seem an obvious answer, but this makes the metal turbulent, removing control from the process.

The integrity of very fine sand moulds can also pose problems, because higher-quality castings are demanded to ensure fatigue life is acceptable despite smaller, thinner-walled, more highly-loaded parts. The material itself is often under scrutiny: aluminium alloys commonly used in automotive applications generally don’t perform well above 200°C, a threshold engines can exceed in extreme cases.

Such pressures have pushed Grainger & Worrall to work more closely with OEMs to take a leap forward in engine design; focusing on high-speed combustion, intake ports, variable valve timing and cooled exhaust gas recirculation, to achieve thermal efficiencies within the 40-50 percentile range. This has been made possible through the exploration of new alloys, coatings, processes and additive manufacturing and sand printing technology.

For example, engines running at high temperatures need to move away from aluminium alloys and we have found iron and compacted graphite alloys an effective substitute. It may seem a retrograde step given the weight of these materials, but they do allow us to make smaller, whole engine packages for more compact, lighter vehicles. We’re also working closely with vehicle manufacturers to find alternative methods to traditional cylinder steel liners. Such materials are space-hungry and can add significant weight to a powertrain. This is why several small series engine programmes have instead turned to cylinder bore coatings, used to make more compact engines with potential benefits in reduced friction and improved temperature control.

In addition to pushing the boundaries of casting possibilities, there are other areas of electric and hybrid vehicle design which require the same design considerations as more traditionally-cast components.

For example, we’re now starting to apply our tooling and manufacturing strategies to the concept of how an Electronic Drive Unit (EDU) will look. Next-generation battery housings are another area of interest. Here, things have started moving towards being similar to air-conditioned rooms, to ensure batteries are always kept at the right temperature. In some cases, batteries are immersed in a fluid to control them, using pressure-tight structures. These structures are quite large, because in a battery-only environment there is not one cell, but thousands. In modern vehicle designs, battery trays are now forming the car’s floor.

We play a key role in engineering these large, potentially heavy castings by producing prototype components which closely mimic the intended production part in essential characteristics. Pressure to reduce time-to-market has meant the days of producing a prototype component which had little in common with the final part except its dimensions are firmly over. This satisfies a need from OEMs for prototypes to be as close as possible to the production part.

The tag ‘prototyping’ has remained and is true in the literal sense because it’s the first-off. But the expectation now is that you’ve done substantial engineering and invested significant effort in the virtual world, and these are almost just prove-out parts.

The power of prototyping

Effective engineering of prototype parts is playing a major role in the passage of new technologies and innovative designs into mass production.

Our task is to replicate how a part will perform and present itself in a production state. We have to make the properties, wall thicknesses and weight the same, and allow a part to exist, defect-free, in a way that will allow it to be mass-produced.

Sometimes, that means working jointly with a customer in a simultaneous engineering environment to create a component that achieves all the goals set for it.

Very often we will have to use processes that will not, for certain, be the processes which will go into mass production. For example, a casting that will go into a high-volume application will probably be cast using a high-pressure die process. The tooling will cost £1m and take six months to make, then each part is considerably more cost-effective.

That’s clearly not the approach that we’re going to take for a prototype because we have neither the time, the money nor the certainty that the design is not going to change.

Making a prototype that is too good can be counter-productive: it can work in a bad way if you make the best part the customer is ever going to see as a prototype, they crash it into a wall and pass all the tests, and then they can never reproduce that in production.

We have to figure out what success looks like; if that’s the ability of an engine block or EDU to transmit lots of torque, meaning material properties at temperature become important, then that is one kind of material discussion. But it might be entirely different for a battery tray, which has to withstand a side impact and not buckle, let the fluid leak out or allow a fire to start. For this, we have to produce an entirely different alloy and have it behave entirely differently.

Given the huge pressure on OEMs to bring new EV and hybrid models to market, we are quickly adopting innovative new techniques to speed up prototype production, such as digital sand manufacture. This is an additive manufacturing process where sand grains are fused together using an inkjet printing system. Quicker and more flexible than traditional processes, the technique is at present confined to prototype and bespoke production but has plenty of potential for higher-volume usage in the future.

Looking ahead, the use of high-precision casting is set to play a pivotal role in the nascent EV and hybrid markets. While we’re pushing the boundaries of physics and chemistry to realise the next generation of downsized ICE engines, our scope of technology has broadened remarkably.

We’re also seeing 3D printing, CT scanning and the use of novel materials within the casting process are proving vital in the development of EDU and other key structural components. There’s clearly still a place for casting in future vehicle design, but it’s considerably more evolved and sophisticated than it has been previously.

ELECTRIC VEHICLES – AN OPPORTUNITY, NOT A THREAT

Michael Cooper, Executive Manager – Machining at Grainger & Worrall, explains why the growth of...

As suppliers aim to meet quality and reliability benchmarks, AMS speaks to a casting company that...